The Evolution of WiFi

Can you imagine life without WiFi? What started from a simple 802.11 standard has now turned into the biggest phenomenon of the 21st century. Since its birth in 1985, the WiFi industry has grown as quick as lightning. From simple speeds that could barely handle email exchange to live-streaming on a mobile device while commuting on a train. We watched WiFi grow, thrive, and now dominate our everyday communications. It’s certainly hard to imagine life without it.

The WiFi technology has changed over time, and in turn, shaped the WiFi we know today. By 2013, there were 1 billion new smartphones shipped. As more users found themselves browsing the Internet, communicating through instant messaging or simply doing more emailing through their devices, the need to have faster wireless Internet increased. That’s what forced the WiFi industry to keep evolving and increase browsing speeds capable of supporting the growing online culture. 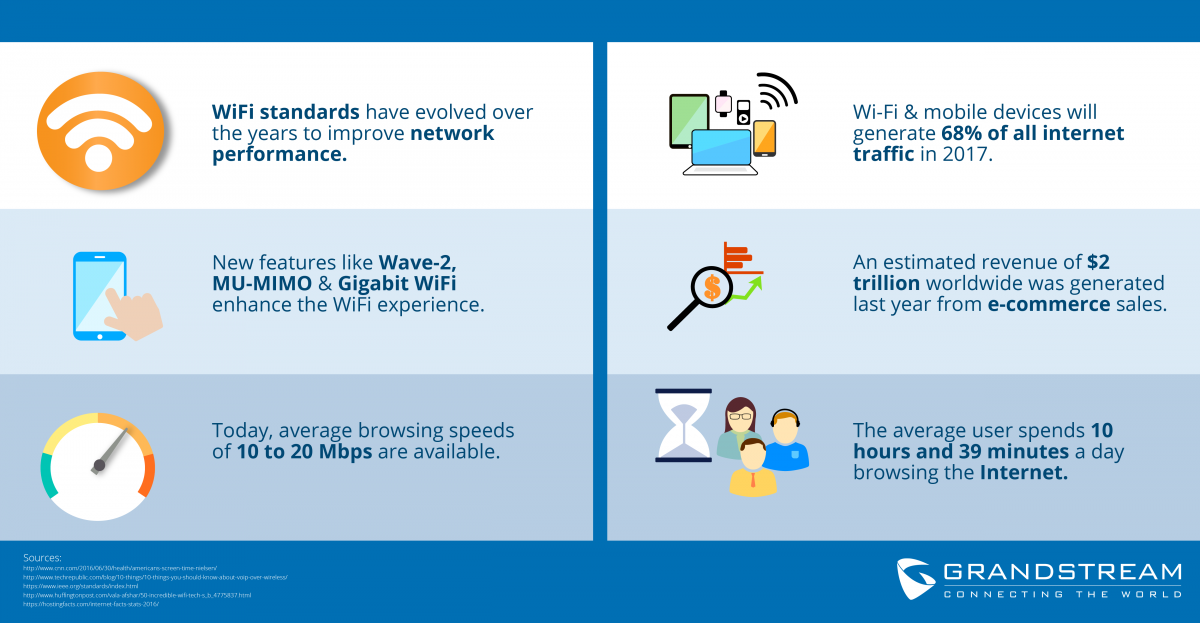 By the early 2010’s there were more mobile devices than people on earth. Users were regularly utilizing their phones for imperative tasks. Reading the news, viewing weather reports, getting from point A to point B, finding restaurants nearby, and even online shopping became a norm. That also meant that providing WiFi in businesses was becoming a demand rather than a commodity. With 10 billion connected devices globally and a revenue of $2 trillion from e-commerce, it made sense businesses were leaning towards the WiFi craze. This is where the current extent of Gigabit WiFi began. Features were added that increased networking performance, making every day Internet browsing a breeze.

Today, users around the world require standard WiFi speeds that can handle multiple online activities in an instant. The average user spends 10 hours and 39 minutes a day browsing the Internet, so network speeds must be up to par with those needs. To keep up with emerging trends, the WiFi standards must continue to improve through features like Wave-2 for faster performance. Meaning networks can multitask by sending data to multiple devices, improve overall network efficiency and throughput thanks to MU-MIMO technology, achieve higher WiFi speeds of 10 to 20 Mbps and significantly enhance users’ WiFi experience.

WiFi has come a long way since it was first introduced 32 years ago. Today users have the power to achieve anything online, and to do so, they must be equipped with a strong network that can handle heavy traffic. Whether you get your education online, work remotely out of your house, or simply browse through social media, having a reliable WiFi network that can sustain today’s online culture is not just a choice, it’s a necessity.